So I've been working hard to get the game to actually be playable, meaning you can actually hit your opponents! (Imagine that!) So I'm proud to say that all the attacks are in and the hitboxes work perfectly. Now you can have the world's first 4-player platformer fighting game in your pocket!

One of the biggest parts of this updates is that projectiles are finally working. There still remains a few problems with them, but those bugs should be fixed in the next update.

What's anything without food? Pick up the fruit for a health boost! 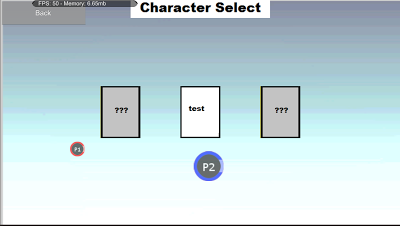 I'm taking the development of multiplayer one step at a time. For this version, I got it so four players can connect into one room and select characters together.

And if that wasn't enough for you guys, here is the full list of updates!
- Menu sound effects
- Background camera fixed
- Flash of light and particle effect when character dies
- Game camera doesn't move too far away from stage
- Timer at top of screen
- All attacks
- On screen stats
- Hitboxes
- Basic mode-type AI (switches between follow and attack mode)
- Question mark boxes for characters
- Characters flinch when attacked
- Damage taken when attacked
- Local save files
- Adjust size of controls
- Credits
- One person on a ledge at a time
- Pan during pause
- Character select for multiplayer
- Projectiles for characters (ex. fireball)
- First item

Or watch the video of it below!

Released for Google Play Store Here's the download link:  https://play.google.com/store/apps/details?id=com.impactgamesstudio.games.supersmashclashapp I apologize for not posting in forever, but I have been so busy with this project I never had time to update you guys. Here's what's coming this Sunday. Official Trailer Before you move on, watch this quick video highlighting the final release of Super Smash Clash. Anyone else feeling pumped yet? Five Characters That's right! There's not just two like before, but five! You start out with Flare (in the upper left corner), and work your way to unlock all five. Each of these characters are completely unique, so make sure you try all of them to find your favorite. Classic Mode The first game mode you have is classic. In this mode, you play through 9 levels trying to get the fastest time possible. There's easy, medium and hard mode (I wouldn't recommend hard mode without havin
Read more