What is Changing in Smash Clash 0.2.5

Particles are beginning to be used to their full potential such as red and white trails off the fireballs. You might also notice the fireballs themselves have been enlarged.

Players now each have their own player marker. In singleplayer, yours will always be red, while the CPUs have a grew arrow. 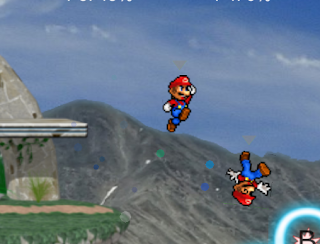 When you hit someone hard, you can see it now. Your opponent will not only flinch, but start to spin. The harder you hit them, the faster they spin. 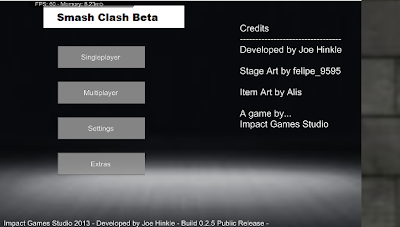 Additionally, the menu has been given a slight upgrade in its look.

AI:
The CPUs have had some major improvements in version 0.2.5. They can get off ledges on their own (imagine that!) and they can attack you when you are sitting on the ledge. CPUs will not sucide on their own (a glitch in previous versions). Additionally, small tweets have been made to how the CPU behaves in general.

A new "B" button has been added, now allowing each character to use both an "A" and "B" attack. A total of 8 attacks can be achieved! This allows each character in the game to be vastly different than the others, making the game fun and new to play each time.

Physics:
One of the biggest problems in version 0.2.0 was that when a player was hit, the knockback would only be applied across the y-axis. Basically, you couldn't knock players off to the side, only upward. Now, the physics have improved tremendously and will continue to be tweeted as new updates roll out.

Another major change is the way the game handles attack movements. Now there is a short delay after each attack where your character is disabled, making a miss leaving yourself more open to a counterattack.

The multiplayer beta is now functional. Up to four devices can play in a single game setting! No other mobile game has ever shown such a unique multiplayer fighting game style such as Smash Clash! I've tested it with a few of my friends, and I still remain undefeated (nobody defeats the developer, it's just a natural law) so I cannot wait til the full game is released so maybe one of you out there can challenge me. Multiplayer is still in it's very early stages so expect to have problems. If you notice weird bugs please contact me. Generally, multiplayer should be good enough to have a decent battle with a friend or two...or three.


Please note that Smash Clash is still in its very early stages. If you spot a bug, don't hesitate to email it to me at impactgamesstudio[at]gmail.com (replace the [at] with @ of course).

Or watch the YouTube video. Note the low framerate is due to the video recording software. The actual game runs at 60 FPS.